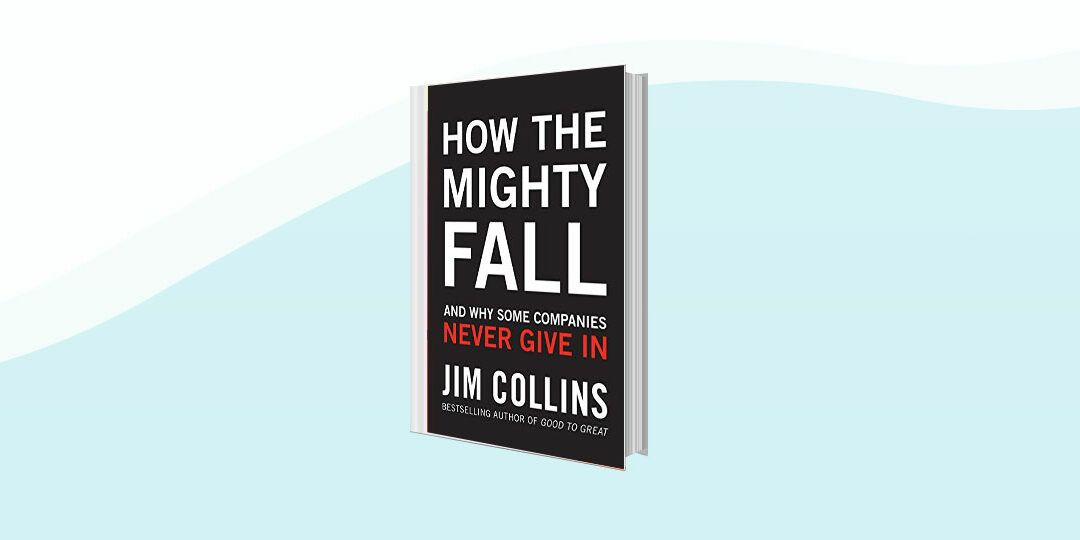 In 2004, Jim Collins was invited to lead a discussion at West Point. The attendees included representatives of the military, business, and social sectors. The question discussed was whether America was on the edge of falling from great to merely good.

A chief executive asked Collins this prescient question: “When you are at the top of the world, the most powerful nation on Earth, the most successful company in your industry, the best player in your game, your very power and success might cover up the fact that you’re already on the path to decline. So, how would you know?”

This question haunts Collins, and the book How the Mighty Fall, which at one point was only intended to be an article, sets out to answer that question. He likens the fall to cancer; one can look utterly healthy on the outside yet already be sick, as was the case with Bank of America, a fall he details vividly in the preface.

The book is the result of “more than six thousand years of combined corporate history” that resulted in a five-stage framework to explain the death throes of a company, though it’s important to note that some companies can turn it around. Disney, for example. But for Bank of America in 1985, everything looked rosy. “And that’s what makes the process of decline so terrifying,” Collins writes; “it can sneak up on you, and then—seemingly all of a sudden—you’re in big trouble.”

The stages may speak for themselves:

1. Hubris Born of Success. When a company gets proud of itself, they begin to make mistakes. They may even fail to notice competitors. This was the case, as Collins details, when Ames was overtaken by Wal-Mart, or when Circuit City was overrun by Best Buy. When a company ceases hewing to its values, the company loses its rudder.

2. Undisciplined Pursuit of More. Overreaching is a culprit here, when a company tries to expand into areas it doesn’t belong, doesn’t understand, can’t compete in, or simply where there is no market or need, and it soons begin squandering resources. It begins with “ambition, creativity, aggression, and/or fear.” Rubbermaid, once touted as more innovative than 3M, Apple, and Intel, gets the stage here. The company made too many products where they couldn’t control costs or fill orders on time. As Merck found with its disastrous pill Vioxx, “catastrophic decline can be brought about by driven, intense, hard-working, and creative people.”

3. Denial of Risk and Peril. Caught in the illusion of success, and failing to see how one’s idea may be a dud, companies invest in a significant risk, as many companies did in 2008. Motorola, at a time when cell phones were quickly gaining ground, stuck stubbornly to its idea of Iridium, a satellite-powered communication system that used phones the size of bricks. It destroyed the company. Texas Instruments, however, bet big only when they had empirical evidence to back up their idea of DSP, and it paved the way for the companies expansion. Denial of risk and peril led to the seemingly small O-ring problem that led to the Challenger explosion in 1986.

4. Grasping for Salvation. When companies really begin flailing, it is not uncommon to throw all caution to the wind and grasp at a “silver bullet.” HP did this by hiring a superstar CEO who threw them into a vast array of hurried changes that, ultimately, didn’t work. IBM, on the other hand, hired a long-term executive of the company as CEO who methodically went about analyzing what was needed, the “pedestrian, arduous process of rebuilding long-term momentum.” It worked.

5. Capitulation to Irrelevance or Death. The bottom line of a business, as Collins quotes Stanford professor Bill Lazier, is that “you pay your bills with cash.” And revenue does not necessarily equal cash. We’ve seen the companies that have spiraled to the bottom, Titanics hitting the sea bed.

The bottom line is that it doesn’t have to be this way; any company can arrest this fall, and especially in steps 1, 2, and 3. In 4, things become far more difficult, but it is possible to pull out of the tailspin. But step 5 is terminal.

Dick Clark, CEO of Merck, said, “A crisis is a terrible thing to waste.” Instead of blaming outside forces, as Zenith did before its eventual crash, after decades of dominating the TV market, we must realize, as Collins says, that “we are not imprisoned by our circumstances, our setbacks, our history, our mistakes, or even staggering defeats along the way. We are freed by our choices.”