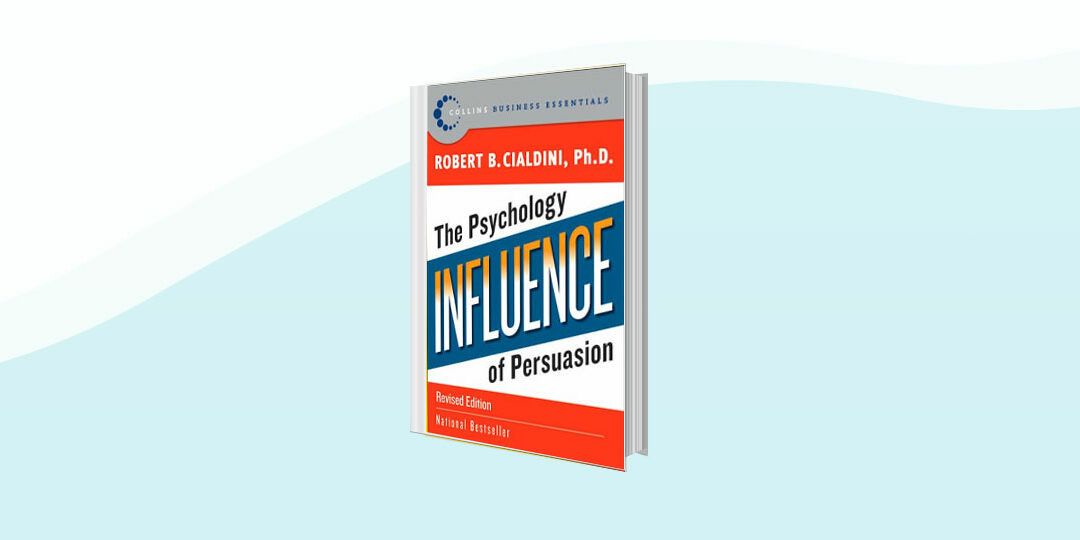 Before we proceed to the idea of total motivation, when we look at the book Primed to Perform, I thought to take a detour into our some deep reflections on the mind that is to be motivated. To be motivated, perhaps first and foremost, is to say yes to something.

What is it that makes people say “yes”? This is the central question to all marketing, and Influence: the Psychology of Persuasion seeks to answer the question. It does so with aplomb.

Cialdini, an experimental social psychologist, admits to being “an easy mark for the pitches of peddlers, fund-raisers, and operators of one sort or another.” He was driven to determine what lies behind the psychology of compliance.

There’s plenty of tricks in the bag, what Cialdini calls the “weapons of influence.” The reason we’re susceptible to them is simply because making quick decisions is easy for the brain. Coupons that come in the mail from Kroger we assume will save us money—although a case involving a tire company he notes where coupons were misprinted with no discount were still cashed in!

This is because of what are called trigger features, present in not only animals but humans. A common one: “expensive=good.” A friend of the author’s was trying to sell turquoise jewelry that just wasn’t selling. So she told her employee to make a sign, discounting the price by ½. When this friend returned to the shop, all the jewelry was sold, but with a catch; the employee had misinterpreted the instruction—instead of halving the price, she doubled it. That got everyone’s attention.

Whether buying a suit or a new car, the salesperson’s job is to make the big sale first. Afterward, they begin loading accessories, whether it’s a belt and shoes or an FM radio and heated seats. Why? Because once you—and I mean you—make the big, expensive sale, the rest of the items do not seem as expensive in comparison.

There are six main reasons why we say “yes” to getting sold something.

Reciprocation. If you take free samples from Costco, or free truffles from See’s Candies, you’ll recognize this one. The fact is, you can’t take something without feeling a sense of obligation. Your brain, based on thousands of years of evolution, demands that you return the favor. It works because, as Cialdini says, “we have been conditioned to be uncomfortable when beholden.” Another tactic is to offer something expensive and then make a concession by offering something lower priced—especially when achieving that lower price may have been the initial desire all along.

Commitment and Consistency. Once people commit to an action, say buying something or voting for someone, even if it was a poor decision, they will nevertheless justify that decision in order to appear to be consistent. Being social animals, it would be entirely negative to appear to be inconsistent. Cialdini writes about how the Chinese, during the Korean War, had little problem getting American soldiers to speak badly of America, and to do so in writing! To that idea—and this relates back to Mind Hacking, reviewed earlier—the way to commit to something, whether it is to lose weight, quit smoking, or to change our lives entirely, you commit to it by writing the goal down.This triggers the brain to strive to be consistent. And if you write something down enough times, the mind will begin to believe it and, more importantly, change its behavior to fit what you’ve written.

Social Proof. We’ve all watched television shows with “canned laughter.” It was certainly a staple from the 1970’s onward. Why do networks do this? Because it triggers us; we end up thinking something is funnier than it actually is. The fact is, we make decisions based on what everyone else is doing. Should a man be fallen down on the street—and this study has been performed numerous times—people will pay no heed because if we see no one else doing anything about it, we assume nothing is wrong. And copycat crimes can be a real thing; if someone else is doing something, there must be something right about it. This is why, he says, suicide rates go up dramatically after a well-publicized suicide.

Liking. It’s no surprise that we do something, like buy a certain brand of sneaker, because someone else that we admire likes it. In fact, Nike has made good use of this fact. But it works without celebrity status, too. My mother went to, and hosted, Tupperware parties in the ’70’s. And we had a lot of Tupperware. Why? Because women are more likely to buy Tupperware containers when their friend is hosting the party. In today’s global society, people are clearly not getting along, which is to say, we don’t like each other. Again, studies support the idea that, if groups are separated and literally put under a flag, they become more competitive—even hostile, as a study of summer campers showed. But give them a common cause where they must work together, they work together with aplomb.

Authority. This should be obvious—we trust those in authority. We might say we don’t, but study after study shows that we respond deferentially to someone in uniform, whether it’s a security guard’s garb or a Brooks Brothers banker’s suit. By this logic, it is no wonder that newspapers report not on what the common Joe says about the global economy, but an expert. There is a dark side to this willingness to follow authorities, as well; the entire Nazi regime was followed mindlessly because they represented an authority that could fix the problems left by the last world war. Soldiers will do exactly what they are ordered, and any of us in their position would, too. Amazingly, a number of studies show that when we are asked to recall how tall a person in authority is, we actually remember them as taller than they actually are.

Scarcity. The whole “time is running out” ploy tends to work. FOMO, the “fear of missing out,” is a real thing, and eBay, in particular, has built an entire industry on this. Indeed, the ticking clock urges one to hurry and make a bid. And not only that, but the presence of other bidders can actually hasten us and make us pay more than we might have ordinarily done! Other sites, like Everything But the House, use a similar auction-style selling maneuver. Our minds consistently value things that we see as scarce—that is, as rare. People thought that Beanie Babies would net them a fortune, but it turns out they were wrong, and most likely because there were Beanie Babies everywhere. This idea also accounts for the stampeding we’ve seen in the last decade at Christmas time. People will literally clobber each other over things whose value is seen as greater because someone else wants it, and there’s not enough to go around.

What use can this book serve us, in not only enrollment management but in the tech industry? For one thing, such information should not be used cynically or callously. At the same time, this gives us an idea of why a high school senior might enroll in college. Social proof, for example, can be a large factor; if a student sees that other students go to college, then they assume this must be a social norm, and it compels them to appear, likewise, consistent to their peers, as well as to those in authority, by making a commitment.

Are there tools we can use? Undoubtedly. For one, offering a free gift stimulates the idea of reciprocity: if we give the student, say, a Spotify playlist, or some other free gift—even if it is as apparently simple as a free lunch during a campus tour—that student will feel an obligation to return the favor. Likewise, by setting up deadlines to apply, that may stir the urgency they feel to take action before they miss out.

Cialdini, to his credit, ends each chapter with a section called “How to Say No.” Once we recognize the ways in which we can be manipulated and exploited for someone else’s gain, we can consciously reject the feeling of urgency, or obligation, and ween ourselves from a supposed authority. Of course we know now, at the beginning of 2020, that the world, certainly via the Internet, is even more ferocious. In the “Economy of Attention,” it is our attention that is the main prize. We should go wary.

The power of Influence is to give yourself an enormous tool of understanding into how your mind works. And that understanding will serve us in comprehending not only the books reviewed here and that will be reviewed in the future, but also in the understanding of, say, our motivation—which we will look at next time when we explore “total motivation.”