Home > Blog > AI-Generated Writing: A Hot Take from the Village Luddite on ChatGPT

AI-Generated Writing: A Hot Take from the Village Luddite on ChatGPT

Over the holidays, while many of us were snug in our beds, settling our brains, envisioning dancing sugar plums and whatnot, those still paying attention to the world began sharing the wonders of the new, freely accessible AI application called ChatGPT, a chatbot capable of generating remarkably coherent writing in just seconds based on simple prompts.

People were asking the tool to generate all kinds of articles, essays, stories, poems, songs, working code samples … anything you can think of. While capable of “sprinkling in misinformation quite confidently,” as one user put it, the chatbot’s results were disturbingly good. (“Disturbingly” being my word.)

It didn’t take long for my Capture Higher Ed colleagues to begin some fundamental research. One asked ChatGPT to compose a punk rock song about the Coen Brothers’ 1998 cult classic, The Big Lebowski.

Verse 1:
I woke up this morning, feeling kind of low
My head was spinning, don’t know where to go
I stumbled out of bed, I couldn’t find my shoes
I walked into the kitchen, my head was in the news

Verse 2:
I grabbed my guitar, I started to play
I felt the energy, it was a brand new day
I sang about the Big Lebowski, the man of the hour
He’s the one who showed me, life has its power

Bridge:
He’s the one who taught me, to take it slow
Life is short, don’t let it go
I learned to roll with the punches, and just keep on trucking
Thanks to the Big Lebowski, I’m never stuck in

I can just hear Lebowski’s narrator, “The Stranger” (played by Sam Elliott), asking: “You’re gonna write an entire punk song about The Big Lebowski and not use any curse words?” But as punk lyrics go, they’re pretty good … and the song has that nice verse-chorus-verse-chorus-bridge-chorus structure. I can easily imagine those lyrics being sung furiously and unintelligibly amid shrieking guitars and thundering drums.

Another colleague asked ChatGPT to draft a poem about Capture.

Ah, Capture Higher Ed, a noble cause
A tool for colleges, a guiding force
A beacon of hope in the midst of doubt
A means to guide students, a way to scout

For colleges, the choice is clear and true
To turn to Capture Higher Ed, and bid adieu
To all the troubles that once did plague
The enrollment process, a constant blockade

With Capture Higher Ed, a college’s fate
Is not left to chance, but rather to the gate
Of opportunity, which it doth open wide
For students of all walks, from far and wide

So let us sing the praises of this tool
A noble servant, a faithful jewel
To colleges seeking to expand and grow
Capture Higher Ed, the way to go!

It’s not Keats, but, again, it has a nice structure. As a member of Capture’s marketing team, I certainly like the message we are getting out. If AI is grabbing what is known and presented about Capture on the internet to generate this verse, I’m gratified to see “noble cause,” “guiding force,” “beacon of hope,” and the like. Nice work ChatGPT. You’re making me look good. 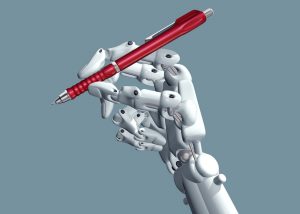 You’re also scaring the living daylights out of me!

As a long-time writer and editor, I find ChatGPT’s recent advances to be as fascinating as they are existentially troubling, inspiring me to ask comparable questions to those of national security analyst and op-ed writer Peter Bergen: Is no career safe anymore?

“It’s long been clear that artificial intelligence (AI) can one day replace many humans working in fields such as customer service, insurance underwriting and manufacturing,” Bergen wrote. “Yet, I have long been complacent about my career as a writer. After all, what AI tool could replace the workings of the human brain?”

I often jokingly describe myself as Capture’s village luddite and, as my friends continued their holiday fun with ChatGPT (one used it to write a letter from Santa to his kids), my feelings were those of profound fear and loathing. I would say I reacted like an early-19th century British textile worker regarding a mechanized loom or knitting frame for the first time.

Artificial Intelligence had a big year in 2022 when it comes to the right side of the human brain. That’s the creative, artsy side. Increasingly, we appear to be on the threshold of mainstreaming AI-written novels, AI-composed music and AI-created art.

And several colleges and universities appear alarmed, some already restructuring classes and taking measures to make sure students don’t exploit the technology. But as Inside Higher Ed recently reported, the level-headed approach to this evolving technology will be to bring students into the conversation, experiment with it, plan accordingly and avoid panicking.

Or we could smash it. Destroy it. Kill it! (Just leaving that on the table.)

Perhaps sensing that the village luddite was not enjoying the conversation around ChatGPT as much as everyone else, one of Capture’s senior data scientists — someone who works with AI technology every day — reached out.

“It’s certainly no replacement for writers in my opinion, but it could possibly be used by writers to generate outlines that could be modified creatively,” he said. “Perhaps It could be used to do basic fact-finding work, or to summarize information that would otherwise take a writer considerable time to assemble. It could also generate text that could be paraphrased into something more useful.”

Sounds reasonable enough. When I inquired about the possibility of smashing it, destroying it, killing it … he didn’t respond.

I should end this panic attack with a Roko’s Basilisk disclaimer. What exactly is such a thing?

Born out of a thought experiment 10 years ago — and certainly inspired by the Terminator movies of much earlier— Roko’s Basilisk is a theoretical idea about thin-skinned robots. The theory posits that, when the singularity happens and Artificial Intelligence takes over (which should be anytime now), it will cull those people who were ever digitally on record against AI. The robots will hunt them down and eliminate them.

I guess what I’m saying is … I would like to apologize for the “smash it, destroy it, kill it” thing. That was out of line. I for one welcome our new AI overlords!