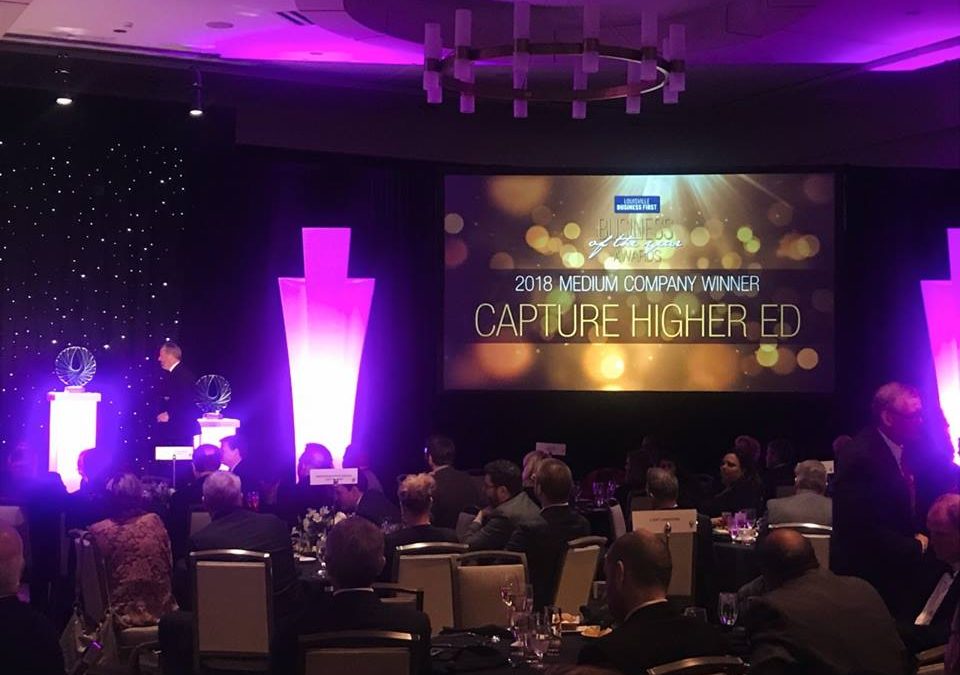 Capture Higher Ed was proud to be named “Medium Company of the Year” during Louisville Business First’s 2018 presentation of The Business of the Year Awards. The Louisville-based software company that develops and manages high-tech marketing tools to help colleges and universities recruit students received the award during a ceremony, Dec. 3, at the Louisville Marriott Downtown.

Called the “Eagle Awards of Excellence,” the annual business awards pay tribute to companies, non-profits and individuals who have recorded outstanding accomplishments over the last year.

“I am both shocked and very honored to accept this on behalf of the team at Capture,” CEO Steve Huey said during the awards presentation. “A few years ago, we felt like we were either on the verge of something really great or that we were horribly crazy. I think we’re still probably a little bit crazy, but we’re doing some fun stuff and it is a real honor to accept this award.”

Huey talked about the challenges of building a start-up company.

“What most people don’t understand is that doing start-ups — and I think of us as a start-up not as a medium-sized company — is very tough,” he said. “Someone recently approached me and said, ‘Well, I’m thinking about doing a start-up.’ And I said, ‘Don’t! Go get a job with a real company. Don’t do this because it’s really hard.’

“Awards like this help you put it all back into perspective and give you a little more courage to attack tomorrow. So thank you very much on behalf of the 78 people I have been able to hoodwink into working at Capture. We really appreciate it.”

Several of Capture’s client colleges and universities welcomed historically significant classes for the fall 2018 semester. Overcoming a national trend that has seen an 8 percent drop in traditional college enrollment over the past seven years, these institutions are reporting some of their best classes ever — in both number and academic quality of students.

The estimated $11 billion higher education recruitment market has experienced a variety of challenges over the past decade. Since 2011, both two-year and four-year non-profit institutions have increased overall advertising budgets by about 44 percent. This increase coincided with the almost 8 percent drop in traditional college enrollment.

Founded in 2011, Capture is a tech startup that designs and implements cutting-edge marketing software and services for higher education recruitment and enrollment management. Last year, the company also expanded its tools and services to help universities in their fundraising efforts. Capture is headquartered in Louisville, Ky.