Learning From a College Mission to End Poverty 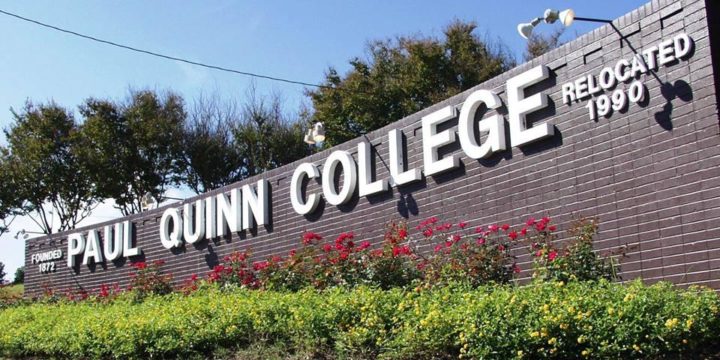 “We have one goal,” says Michael Sorrell, president of Paul Quinn College in Dallas, Texas. “It is a simple goal. It defines everything about us, and our goal is this: we want to end poverty. Period. That’s it.”

Sound far-fetched? Not to Sorrell. In fact, he came in as Paul Quinn College’s president in 2007, shut down the football team, and converted the football field into a campus farm. Remember. This is Texas.

Talk about commitment to ending food insecurity and injustice.

The “Farm,” as it’s referred to, is located in a federally recognized food desert and has produced more than 30,000 pounds of organic produce since its inception in March 2010. No less than 10 percent of this produce has been donated to neighborhood charitable organizations. The rest supports community members, the college, and restaurants and grocers throughout Dallas. In fact, one of its biggest customers is the Dallas Cowboys.

The students get produce from the Farm. It is operated and maintained entirely by student-employees who actively engage in all farm activities from business planning to marketing and, thus, serves as a model of socially and environmentally driven leadership and entrepreneurship. The Farm provides hands-on educational experiences for the students, as well as local youth and adults, to promote healthy eating, improved food access, and environmental stewardship.

Sorrell explained much of this as a keynote speaker at South by Southwest on March 6, 2018.

So why also is this college’s idea so innovative? It’s because PQC has a 90 percent Pell Grant student population. That statistic is a microcosm of a larger, nation-wide issue, where nearly 45 million Americans are living in poverty with food insecurity, substandard education, and the ever-present threat of crime and fear.

“That’s not right,” Sorrell says. “We don’t need people to tell us what it’s like in these communities because we go to these communities. I don’t need my recruiters to tell me what the schools are like because I’ve gone to the schools. I have walked the neighborhoods that my students come from. I have walked the hallways of their schools. I have sat in their classes. I have been cold when they are cold (referring to this Washington Post article during his presentation that describes students of Baltimore City Public Schools freezing in classrooms due to outside winter conditions that have affected their old school buildings, oftentimes resulting in no heat) … When you know where your students are coming from, it affects you. It changes you. Poverty changes you … Once you see poverty up close, once you see how your students live, how does that not change you? How does that not make you angry? How does that not make you frustrated? How does that not make you want to change everything about that equation to end poverty?”

The 11-year leadership of Sorrell has resulted in major wins for the college. For the first time in the school history, of first-time freshmen, from the fall semester to the spring semester, 89 percent came back. The overall retention rate has grown by more than 35 percent. The graduation rate has increased by over 20 percent.

“We care,” adds Sorrell. “We’re an institution that is dedicated and devoted to ending poverty, so that’s what we’re going to do. That’s why we turned our institution outward to address the needs of the communities we serve. That’s why we challenge other schools and universities to do it as well.”

So what we can learn from a college whose sole mission is to end poverty? The power of leadership and transformation. Every college and university has a mission statement and a vision statement. Being able to take that college mission and vision, and funnel it into a legacy greater that any one person, to affect change to entire communities — that’s what leadership and transformation truly are.