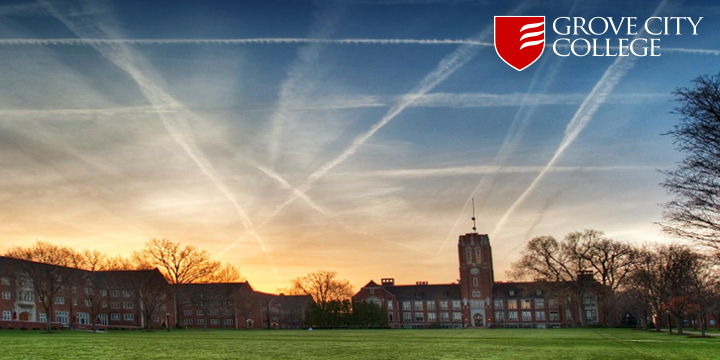 Introducing one of Capture Higher Ed’s newest partners, Grove City College in Pennsylvania. Located in the town of Grove City — about 60 miles north of Pittsburgh — the Christian liberal arts college serves more than 2,000 students through more than 60 majors and over 50 minors.

Founded in 1876 as Pine Grove Normal Academy, the school grew under the leadership of its first principal, 22-year-old Isaac Ketler, and soon began offering collegiate coursework. The academy received its charter to become Grove City College in 1884. The dream and lifelong work of Ketler, who became the college’s first president, it grew from 13 students to 660 and expanded by 40 acres within its first 15 years.

During its formative years, Grove City benefitted from a special relationship with the Pew family, which made a fortune in natural gas during the Pennsylvania oil boom of the late 19th century. In 1881, Joseph Newton Pew, who began his career as a schoolteacher in Mercer, Pa. (where he had taught Isaac Ketler), developed the Keystone Gas Company. By the following year, he was delivering gas to Pittsburgh and owned the Haymaker gas well in Murrysville, then the largest in the world.

A devoted Presbyterian, Pew was enlisted by his former student, Ketler, in 1895 to help support Grove City. Pew spearheaded the college’s reorganization as a nonprofit institution and was elected president of the College’s Board of Trustees. Pew devoted much of his philanthropic energy to Grove City and provided generous support until his death in 1912.

The Pew connection to the college continued under Pew’s second son J. Howard Pew — a Grove City alumnus and the college’s longest-serving chairman of the board of trustees — and the family’s imprint remains on campus, etched in residence halls, a performing arts center, and a lecture series.

Today, Grove City remains committed to laissez-faire economic freedom and that spirit extends into every area of college life, including academic and financial independence. The college is one of only a handful of independent institutions that does not depend on the federal government for any kind of support.

The mission of Grove City is to “equip students to pursue their unique callings through an academically excellent and Christ-centered learning and living experience distinguished by a commitment to affordability and its promotion of the Christian worldview, the foundations of free society, and the love of neighbor.”

We are proud to welcome Grove City into the Capture family of partners.