Exciting, Enticing But Not Weird: A Brief History of College Viewbooks 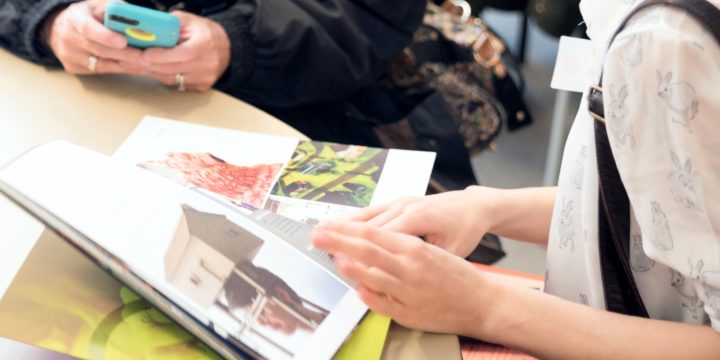 If there’s one thing I’ve seen a lot of, it’s college viewbooks — the colorful catalogs that drop into the mailboxes of high school kids around the country. But where did they come from?

Donna Lehmann, exploring the history at Inside Higher Ed, points out that the history of college viewbooks actually has its origin in the original Sears, Roebuck and Company mass marketing. In 1892, Sears sent out 8,000 handwritten postcards — and got back 2,000 orders. By 1919, colleges had begun to do the same. A presentation Lehmann cites from the 2015 Carnegie Conference shows an early viewbook by what is now the University of New Hampshire.

The first mention of “selling” education, she notes, seems to have appeared in a 1939 article in the Journal of Higher Education. A lot of this had to do with the upswing, by the early 20th century, in college applications — colleges could now afford to shape their classes, and these early mailers went a long way in helping colleges find new students.

But by the 1970’s, that huge number of students was rapidly declining. Cue the crisis. A 1978 book, Marketing Higher Education, pointed out the problems with college communications. Among them, saying what interests the college rather than what interests the student; poorly-considered photography; and insisting that college is “all things to all people rather than a specialized place for a special kind of person.”

In 2008, a study called “What’s Being Sold and To What End: A Content Analysis of College Viewbooks” found that one big problem with viewbooks is that all colleges end up sounding about the same because there is risk in sounding different from the herd. They want to sound, according to the researchers, “exciting and enticing but somehow familiar, unique but not weird.”

I mentioned I’d seen quite a few college viewbooks — and as a writer for Capture Higher Ed, it’s my business to do so. Our marketing insists on being risky; we find what is different about each college and really talk about it — what Seth Godin called the “purple cow,” the thing that makes students turn their heads and go, “Wait, what?”

And coupled with Capture Behavioral Engagement (CBE), which seeks out the students who are ready to check out that purple cow — i.e., the student who is a great fit for your college — and delivers the communications to them while they’re on your site, or right into their inbox, whether it be on their desktop or on their phone. Viewbooks can be cool; don’t get me wrong. When coupled with our data-driven technologies (not to mention our excellent writers), you’re sure to hit the mark.

And you don’t have to be Sears to do that. Ask us how.