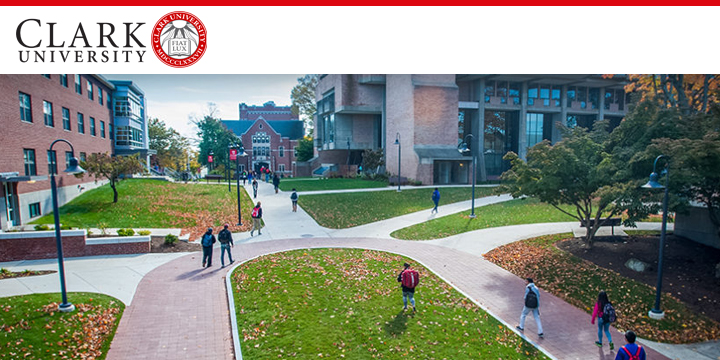 Located in Worcester, Mass., Clark is a private research university that promotes a rigorous liberal arts curriculum that addresses social and scientific challenges on a global scale. The university has an enrollment of more than 3,100 students and offers more than 30 undergraduate majors, 19 master’s degrees and nine Ph.D. programs in six schools.

Founded in 1887, Clark University was the result of two strong early visions. Its founder was Jonas G. Clark, a successful Massachusetts entrepreneur, abolitionist and book and art collector who envisioned a university that offered a rigorous but affordable undergraduate college for young men. The university’s first president was G. Stanley Hall, a pioneering psychologist who studied adolescence and founded the American Psychological Association. His heart was set on a graduate-level, research-oriented institution.

While both visions eventually prevailed, Hall’s idea initially won out and Clark University opened its doors in 1889 as the first graduate-study-only institution in the United States, with degrees offered in biology, chemistry, mathematics, physics and psychology.

Ever since its earliest days, Clark has thrived at the nexus of world-class teaching, boundary-pushing discovery and creative invention.

Clark continues to make history today. It is perennially ranked among the top small colleges in the country … and even the world. The Times Higher Education (THE) recently placed the university No. 7 on its list of “World’s Best Small Universities.”

“Clark University’s mission is to educate undergraduate and graduate students to be imaginative and contributing citizens of the world, and to advance the frontiers of knowledge and understanding through rigorous scholarship and creative effort.”

We are proud to welcome Clark into the Capture family of partners.