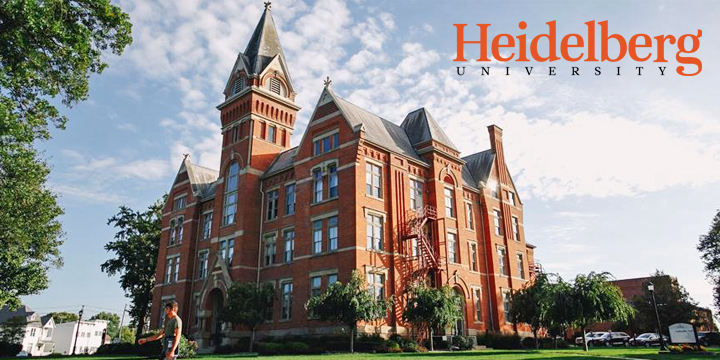 Located in Tiffin, Ohio, Heidelberg is a four-year, private university that provides a liberal arts education and professional preparation to nearly 1,200 undergraduate and graduate students through 74 major, minor, graduate and pre-professional programs.

Founded in 1850 by members of the German Reformed Church, Heidelberg started as a church-affiliated institution to minister to the German population of Ohio. The college opened its doors in a room on the third floor of what was known as “Commercial Row” in downtown Tiffin. Five students were enrolled for the first classes, but 149 were listed on the roster by the end of the first year.

In those early years, Heidelberg operated a seminary and a preparatory academy in addition to the college. Into the 1890s and beyond, the idea of training Christian scholars remained the goal of a Heidelberg education. No layman served as president until after World War II. The school has remained affiliated with the Reformed Church, later the Evangelical and Reformed Church and known today as the United Church of Christ.

In 1987, after a 61-year absence, Heidelberg reinstituted a graduate program. Currently, students can earn master’s degrees in counseling, education, music and business administration, in addition to bachelor of arts, bachelor of music and bachelor of science degrees.

In 2009, Heidelberg College became Heidelberg University, reflecting more appropriately the academic offerings of the school. Heidelberg has been continuously accredited by the North Central Accrediting Association of Colleges and Secondary Schools since that organization was founded in 1913.

The Heidelberg campus is as unique and honored as its nationally recognized academic programs. The collage of historic and contemporary architectural styles on the tree-lined campus includes 10 buildings that are listed on the National Register of Historic Places.

The university’s mission is to be a community of learning that promotes and nurtures intellectual, personal and professional development, leading to a life of purpose with distinction.”

We are proud to welcome Heidelberg University into the Capture family of partners.