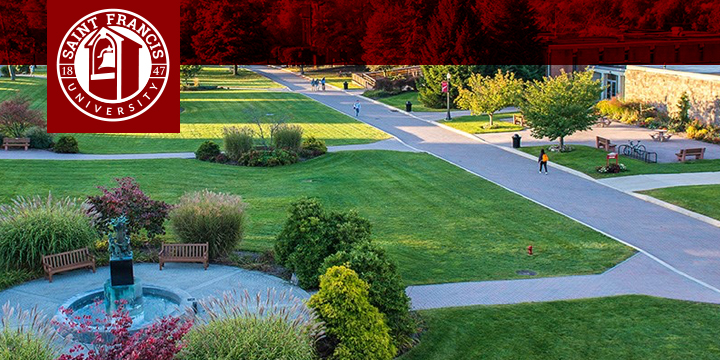 Capture Higher Ed is proud to introduce one of our newest partners, Saint Francis University. Located in Loretto, Pa., Saint Francis is the oldest Catholic-Franciscan college in the United States and one of the first Catholic universities in the country to become coeducational.

The seeds of what has become SFU were planted in 1847 by six Franciscan friars from Ireland who founded a boys’ academy in the mountain hamlet of Loretto, not far from Pittsburgh. Over its first 50 years, the academy evolved into a higher education institution, becoming Saint Francis College in 1911.

While enduring some devastating fires along the way, the college continued expanding and advancing throughout the 20th century. By 2001, the school officially became Saint Francis University.

Today, SFU’s beautiful, 600-acre campus provides the ideal setting for focused learning in harmony with nature. It also includes several unique amenities and traditions, a variety of student clubs and organizations, a strong Greek system, a calendar packed with major events and much more.

SFU’s athletics department dates back to 1892 when football was first played at the school. By 1927, the college’s sports teams became so noted for their speed that it earned them the nickname Red Flash — a name that remains today. Now with 21 men’s and women’s NCAA Division-I sports programs, the Red Flash compete in the Atlantic 10 Conference (A10) and the Northeast Conference (NEC).

The mission of SFU is to instill “a mind for excellence, a spirit for peace and justice,” and “a heart for service.” Its vision: to be “the Catholic university of choice for high-ability students who seek an authentic, academically rigorous, interactive learning experience where they can grow intellectually, spiritually, morally, and socially.”

We are proud to welcome Saint Francis University to the Capture family of partners.