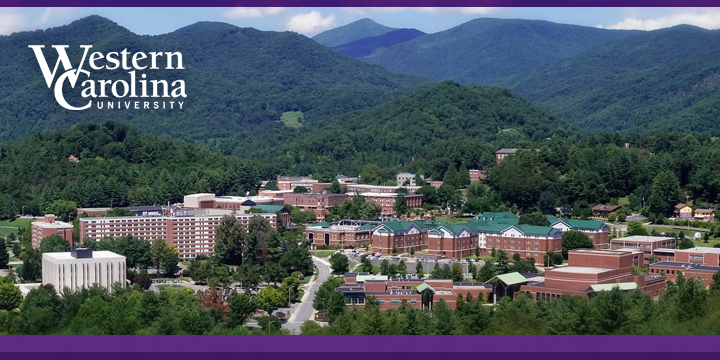 Located in Cullowhee, N.C., WCU is the westernmost institution in the University of North Carolina system and provides comprehensive educational opportunities to more than 11,000 students in undergraduate and graduate programs.

Consistently ranked as one of the Top 15 public regional institutions in the South, the university offers a wide variety of undergraduate and graduate degrees at its main campus in Cullowhee, its instructional site at Biltmore Park in Asheville, and online. Its course offerings include nationally recognized programs in nursing, education, forensic science, emergency management, entrepreneurship, engineering, project management, natural resources and much more.

WCU traces its roots back to 1888 when a group of families in the Cullowhee Valley undertook a community effort to create a school for their children. In its second year, a young teacher from Virginia, Robert Lee Madison, was hired to educate some 100 students between the ages of six and 20. His mission, which he called the “Cullowhee Idea,” was to provide competent teachers for rural classrooms.

In 1893, he obtained an annual state appropriation of $1,500 to support a teacher training department for the new Cullowhee Academy. By 1897, its enrollment had swelled to 234 and funding had increased for new construction.

During the first quarter of the 20th century, the academy revised and broadened its curriculum. In 1925, it became the Cullowhee State Normal School; and then was renamed again in 1929, becoming the Western Carolina Teachers College to reflect the school’s expanded mandate as a four-year college.

In the aftermath of World War II, the college expanded enrollment and campus construction dramatically. It was renamed Western Carolina College in 1953 and added arts and sciences degrees to its teacher education curriculum as well as its first graduate program, a master’s in education. By the late 1960s, the state legislature elevated the college’s status to that of a university. In 1972, the state merged Western and 16 other state campuses into the University of North Carolina system.

Today, WCU remains committed to creating learning opportunities that incorporate teaching, research, service and engagement. The university’s unique mountain location helps inspire a vibrant campus community with more than 170 student clubs and organizations as well as a busy arts calendar and the campus’s own adventure guide service. WCU also has 16 men’s and women’s varsity sports teams; the Catamounts compete in the Southern Conference.

We are proud to welcome Western Carolina University to the Capture family of partners.