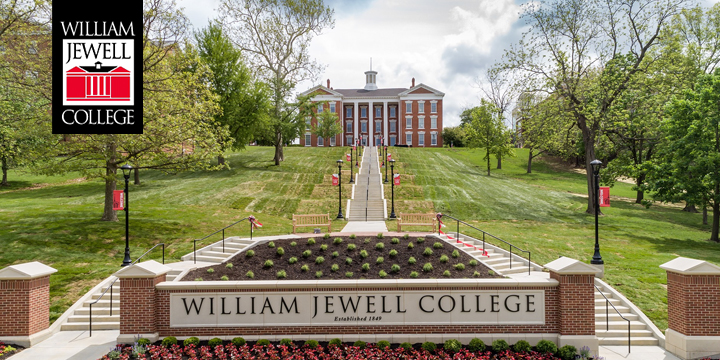 Introducing William Jewell College, one of Capture Higher Ed’s newest partners. A private, four-year liberal arts college in Liberty, Mo., Jewell has an enrollment of about 1,000 students pursuing more than 40 areas of study.

Founded in 1849, the college has a long and rich history.

As settlers migrated West in the 1830s, a group of Baptists who lived along the Missouri River envisioned a college at the edge of the American wilderness in Liberty. Many towns in Missouri wanted the college, but Clay County Baptists, joined by Mexican War hero Colonel Alexander Doniphan and Dr. William Jewell, a physician, legislator and Baptist layman who donated land for a college, persevered with grassroots fundraising. (Named for its key founder, William Jewell College’s relationship with the Baptist Convention continued through 2003.)

Challenging times in Missouri’s frontier days forced a number of colleges to close, but Jewell forged ahead. As students entered the Civil War, classes were suspended and Federal troops occupied campus, using the college’s Jewell Hall as a lookout point, an infirmary and a stable.

When Jewell reopened, enrollment began to steadily climb for several decades. World War I and the burning of a nearby women’s college brought female students to Jewell, where they were admitted on the same terms as men beginning in 1920. The GI Bill created another influx of students post-World War II.

In the decades that followed, Jewell strengthened its academic profile, adding numerous new programs. In 1982, the College invested in study abroad programs and developed partnerships with Oxford and Cambridge Universities in England to create the Oxbridge Honors Program.

Today, Jewell sits at the edge of both urban and rural landscapes. In one direction lie rolling hills and Midwestern countryside, reminiscent of the College’s rustic beginnings. From another vantage, the Kansas City skyline can be seen on the horizon. The college’s location offers several rich cultural opportunities as well as partnerships with Kansas City corporations, entrepreneurs and alumni yield internships, mentors, research programs, dynamic lecturers and career possibilities.

Jewell has a vigorous student community, with several campus traditions and a full complement of clubs and organizations. The college has 16 NCAA Division-II men’s and women’s sports teams. The Cardinals compete in the Great Lakes Valley Conference (GLVC).

Jewell’s mission and strategic plan is to be “more focused than ever on advancing critical thinking and preparing students to connect their thinking with their purpose. As evidenced in our strategic plan, we have a clear vision for increasing access to education and maintaining a vibrant campus that attracts the best students and faculty, while ensuring our current students have an enriching experience that prepares them for their futures as engaged citizens.”

We are proud to welcome William Jewell College into the Capture family of partners.