Home > Blog > 4. People Styles at Work and Beyond by Robert Bolton and Dorothy Grover Bolton

4. People Styles at Work and Beyond by Robert Bolton and Dorothy Grover Bolton 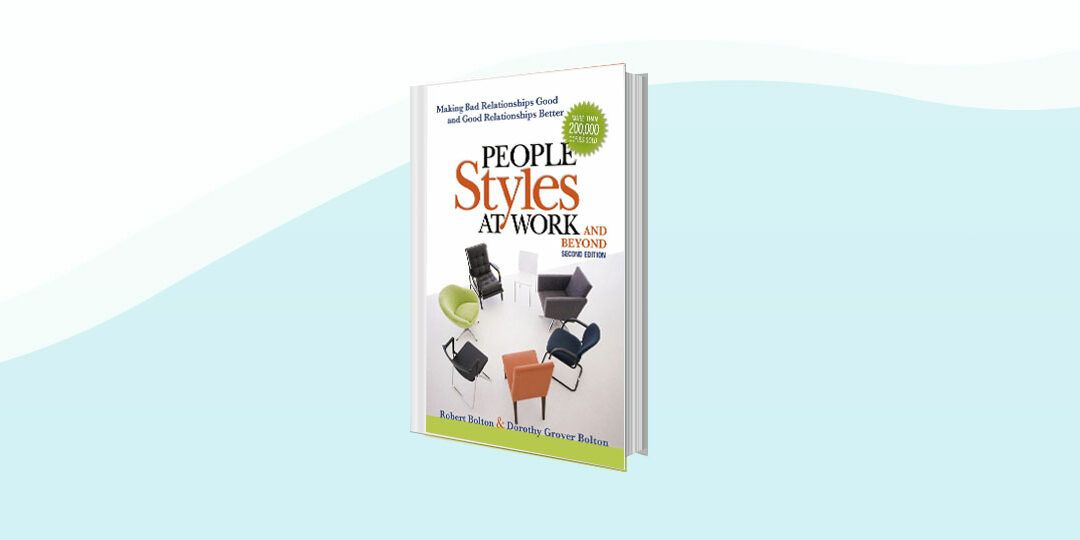 In terms of working together in a company, we often talk about teamwork, communicating, and so on. But how does one do that? We have all had instances of feeling like we’re not being heard, or of someone getting angry with us and having no idea why this is the case. We understand, naturally, that other people are different, but to define that difference is difficult. Let’s proceed by an analogy.

Now, I admit to dabbling in it. I will also admit, aside from the fact that some people attest to its efficacy (I mean, I’m sure some people met online and ended up getting married, maybe even happily ever after), I will also admit that, for me, it just never worked. I could go on and on about the various disappointments, the sheer horror stories, the wasted time and effort, but that would be a project for another time.

But I mention it because of something I noticed: a lot of women (and understandably, I could only see their profiles) very frequently included their Meyers-Briggs scores. You know, “I’m INFJ” or whatever. I always thought it kind of funny but pertinent in a way, too.

You may have at some point in school taken the old “IQ test.” You may, as I have, taken the Meyers-Briggs for yourself. Far from being a definitive description of you—any of these personality inventories are faulty, at best, controversial at worst—it does, to my mind, point to some sort of elemental truth about you. They are a measurement.

Any measurement of personality is really meant for two reasons. One, so that you understand yourself, how you think, what your preferences in behaviors are, how you respond to stress. And two, so that everyone else can understand you. I mean, if you are online dating, guys, it might behoove you to include your MB score on your profile instead of a picture of you holding a fish, or with your shirt off, or worse (and the women have told me there’s worse, believe me). Likewise, you can consider a potential partner’s score, as well. Are you, in fact, compatible?

You may remember a few years back that Eric Shriner, our CTO, gave a lunchtime presentation on “people styles.” What he taught us—with a chart, no less—is what Robert Bolton and Dorothy Grover Bolton describe in their book.

But let’s get to the heart of the matter: what are the “people styles?” There are four.

There are the Expressives. They talk loudly, wave their hands a lot, and are big dreamers. They might have more generalized ideas rather than specifics.

There are Drivers. They want results. They like to see progress happening, and they like directing things.

There are Analyticals, who sit back and consider all the facts before making decisions. They weigh things, sitting back with their arms crossed.

Finally, there are Amiables. They’re good, friendly people who just want to help. They’re more than willing to do as they’re told.

Though you contain all of these characteristics to some degree, you will find that you are dominant in one of them. I, of course, am an Expressive, as you could probably figure out. What determines where you are in the chart are your levels of two attributes: your assertiveness and your responsiveness. Expressives, for example, are more assertive and more responsive. Analyticals, my opposite, are less responsive and less assertive.

So now that you know your quadrant, and, at best, everyone else’s, you can get a sense of where they’re coming from. But that’s not all; each style also has their stress response, and they come in two steps.

The first step for Expressives, when under stress—and by God, I can attest to this—is to get more assertive and more expressive. We get louder. We start hammering our fist on the table. That is to say, our traits are exaggerated, the volume turned up, and it is the same for each style. The second level of stress for an Expressive is to throw up their hands and check out. Which is to say, for each style, the second level of stress, when things really get to be too much, is to do the opposite of your dominant behaviors.

Since I know some Amiables, I’ll describe them, briefly. When things are cool, they do everything with a smile because they just want to make everyone happy. But when they are under the first level of stress, they bear down harder, doing what everyone tells them to their own chagrin while resentment builds. Second level of stress, they literally explode. I’ve seen it. It’s unglamorous. This happens because they are more responsive (“Sure, I’ll do that! Even though I’m totally stressed out”) but, conversely, less assertive.

A while back, maybe a few years ago by now, I gave the test not only to myself but all the other writers. What I discovered was unsurprising—but knowing that fit was critical and helped me frame each person’s behavior. It taught me, too, how to communicate with each person, and how to recognize when they were under stress. And how one communicates with another “style” deserves attention, and the concept is adequately attended to here. If I am an Expressive, say, and I am trying to communicate with a romantic partner who happens to be an “Amiable,” or my manager who is more-or-less an “Analytical,” the task at hand is to mirror their style, not emphasize my own. You will get detailed directions here on how to speak someone else’s language—and that serves to ease tensions.

Further, the book is not only relevant at work. It can be used to communicate with anyone: your spouse, the PTA, your kids, your neighbors, or anyone you do business with. I would say that it can be enlightening, particularly in intimate relationships, and certainly with the kids. But one should remember not to pigeonhole anyone; like the Meyers-Briggs, this is a measurement, a kind of dotted line you can draw around someone, but one that cannot fully define them, either.

Steve, our intrepid CEO, recommended I review this book, and rightfully so. It is essential to not only leadership training but to anyone working with people. And, let’s face it, it might just come in handy in dating, too.