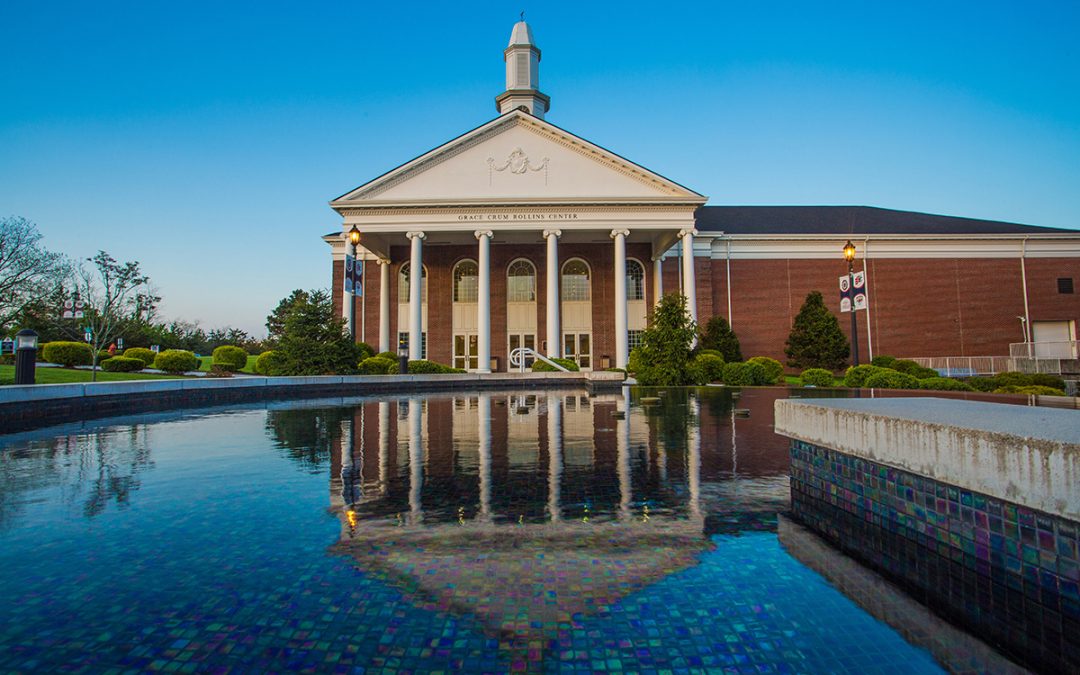 I live in Kentucky, home of horses, basketball, bluegrass and bourbon. It’s also home to several of Capture Higher Ed’s partner institutions, including University of the Cumberlands. They are close enough that I know one of the biology professors there. I’ve even walked the campus at sunset.

So it’s natural that somewhere along the line they might pop up on my social media. Scrolling through Facebook one day, a former editor of mine had reposted a video from UC’s page. I was intrigued enough to watch it. I learned a lot. 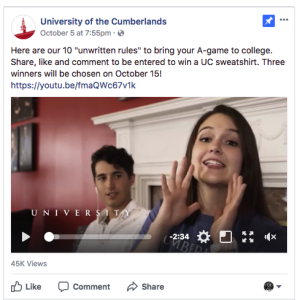 First of all, there’s the venue. By now, I’d imagine most colleges, if not all, have a Facebook presence. Clearly, Cumberlands has made the most of their space. As of this writing, the video they posted snagged at least 45,000 views. In addition to that, 958 people “liked” it, 304 people posted comments, and 505 people shared it.

All this in the course of less than two weeks.

If that doesn’t demonstrate the power of social media presence, I don’t know what does. And then there’s the video itself.

Clocking it at just over two minutes, “The Ten Unwritten Rules of College” is at once informative, completely clever, and, most importantly, funny. It is entirely clear why this video is appealing to prospective students. It’s obvious: the ironic humor, the corny music, the whole premise is instantly recognizable to any high school kid who has scrolled the Internet for any length of time. 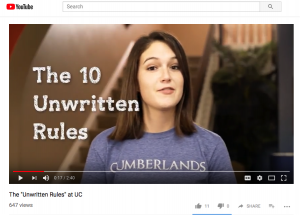 So why so many likes?

For one, note that — like so many winning Facebook ad posts — “liking” instantly enters you to win a UC sweatshirt. I’ve done the same thing trying to get a free hotel stay or concert tickets. (I’ve won neither, but hey, why not keep trying?)

Notice, too, that you can link to the video on YouTube because — no surprise — UC has a good YouTube presence.

How else can you put yourself in a position to go viral? After all, I watched the video — and I’m not even applying to college! But a student can easily go to their Facebook page and notice that the 272 “Reviews” give UC a 4.5 out of 5 stars. And more videos.

Follow the link to YouTube, and of course you can get to their main page. The video on YouTube’s page has seen 647 views! It also allows you to see the host, Skyler, showing you around campus on another video. Same humor, same corny music, same tactics.

There’s a lot to learn from this video. One, students really are using Facebook. Two, videos work. And three, talk to kids in a language they understand and appreciate. The benefits can go beyond likes, shares and comments. It may just net you a new student eager to show others the ropes.