Adaptability has never been higher education’s strong suit. From academic calendars to athletic seasons to recruitment cycles, colleges and universities operate on a series of annual rotations, creating an inertia that often makes change difficult and slow. For those working within cycles, it can be challenging to step off the merry-go-round, acknowledge what’s happening in the larger world, and alter practices quickly and effectively.

But with the political upheaval of the past six years, a worldwide pandemic starting in 2020, the ensuing tight labor market, general economic uncertainty and looming demographic challenges, institutions have been forced to do some serious adapting in recent years — in all aspects of their operations. And, even before these profound disruptions, enrollment management and recruitment marketing were being forced to adapt and reinvent practices in a world being altered dramatically by exponential technology changes.

Thom Golden, Ph.D., the former Senior Vice President of Data Science at Capture Higher Ed, liked to invoke renowned Dutch architect Rem Koolhaas when discussing needed adaptability in the enrollment space. Known for buildings and writings that embrace “the energy of modernity,” Koolhaas is the designer behind the Seattle Central Library, the China Central Television (CCT) Headquarters in Beijing, the Casa da Música concert hall in Porto, Portugal, Embassy of the Netherlands in Berlin, Garage Museum of Contemporary Art in Moscow, among many others.

For one of his best-known creations — the McCormick Tribune Campus Center at the Illinois Institute of Technology in Chicago — Koolhaas famously used the walking patterns of students as a guide. He sent a team of designers to campus in 1997 to observe the walking paths students were taking through a series of parking lots that occupied the area of land that would become the campus center.

The McCormick Tribune Campus Center at the Illinois Institute of Technology in Chicago.

“Using these pathways, Koolhaas created a space that sought to live within the framework of the natural flow of students across campus, rather than steer it,” Golden wrote in 2017. “Stop and think about this for a second: if these college students are anything like me, they are cutting across lawns and parking lots primarily because they’re profoundly late, or just generally do not care where the sidewalk designer thought they should be going. They are resourceful and will always look for the path of least friction.”

Instead of leaning on his architectural expertise to dictate flow, Koolhaas considered and incorporated these student shortcuts into the design of the building and grounds — an instructive practice even enrollment leaders and counselors should use.

As Golden put it: “It takes humility to admit your audience knows their needs better than you do.”

There is a term for the trampled dirt paths that bypass paved walkways and cut across campus lawns much to the chagrin of groundskeepers. They are called desire paths. Whether you’re designing a building, or a set of sidewalks, or a communication plan for prospective students, you will receive data on how useful your target audience found them. Desire paths are stark visual indicators for those of us who create things.

“In many cases, the data isn’t kind,” Golden wrote. “We can clearly see that our designs were ignored, and an alternative path was created.” 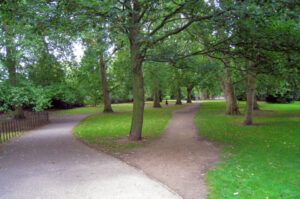 The question is, when your data reveal a desire path, how do you respond? What do you do next?

“When we’re faced with a paved path and a dirt desire path, I am afraid that all too often we are convinced of our own themes and anecdotal evidence and simply re-sod the dirt,” Golden wrote. “We blame the prospective student for not having the bandwidth or interest in reading the copy we slaved over. In essence, we override the data.” 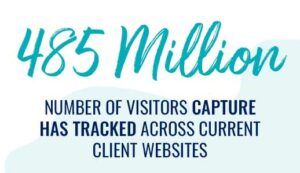 With ENGAGE, Capture’s marketing automation built specifically for enrollment management, we have tracked more than 485 million visits across existing client websites. This data offers a Google Earth-like view into the college exploration behaviors of students in a way that never existed before.

We can see the desired paths and help universities adapt their practices to meet them on these pathways. You do not have to get more students interested in your institution,” Golden concluded. “They are already there. They are highly engaged with your brand. And they have found their way to you through their own low friction pathways that often have nothing to do with how you have designed the recruitment pipeline.

More Than an 18-month Journey

How does the idea of “Adaptability” play into promoting your institution’s value propositions? It goes beyond the changes you make when you can step out of the relentless swirl of cycles, calendars, and seasons. It’s about working smarter (not necessarily harder) by  optimizing your search strategies, utilizing , and guiding and adapting your efforts through predictive analytics.

“The key to relevance is delivering the value message in the way that the prospective student or family member is ready to receive it,” Harris said. “What we have seen is that it starts with website exploration, and then moves into digital advertisement interactions, then to email, followed by text and then phone calls. Recruitment is layered and is more than an 18-month journey now.

“Simple drip campaigns are nice, but if you are going to make an impact, you must be keenly aware of when, where, and how they are exploring your messages.”

Enrollment offices must be laser-focused with their approach to targeting timely, relevant messaging to those prospective students who are most likely to enroll. Part of the best platform of enrollment marketing tools and expert services in the industry — the Behavioral Intelligence Platform — Capture’s leading marketing automation, ENGAGE, helps admissions counselors identify individual students on their website, know what these students want to learn, and deliver timely, personalized messaging that leads to more and better enrollments.

It allows you to meet them, one-to-one, on their individual desire paths.

We hope you’re enjoying our blog series, Promoting Your Institution’s Value Propositions. Be sure to check out the first two installments on Affordability and Authenticity. Next week, we top off our “Four A’s” of value prop promotion with a piece on Accessibility.